Beware of the Frog 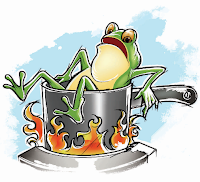 There’s a slightly pessimistic quote attributed to John Lennon that goes – "Life is what happens while you are busy making other plans.".  Be that as it may, as we can always endeavor to be more mindful and present in the moment, but why would this be relevant in a business context?


In the preceding post on attitude towards change, the proverbial frog in the pot of boiling water was mentioned.  “Why doesn’t it just jump out of the water?” is the inherent question – with the analogy of “Why don’t businesses just adapt to changing Customer requirements, the competition, and technology trends?”


Well, “easier said than done” sums it up pretty well I’d say.  The frog doesn’t notice the temperature change until it is too late, and we’re too busy making other plans whilst the premise on which our business model is based on is derailed.  Kept busy, running as fast as possible – but perhaps not in the right direction.  For those familiar with Stephen Covey, the following parable is surely familiar –


The managers are behind them, sharpening their machetes, writing policy and procedure manuals, holding muscle development programs, bringing in improved technologies and setting up working schedules and compensation programs for machete wielders.


The leader is the one who climbs the tallest tree, surveys the entire situation, and yells, “Wrong jungle!”


The list of paraded examples of companies with disrupting business models (Uber, Airbnb, Whatsapp, Netflix, Spotify ..), obsolete business models (stockbrokers, encyclopedias, phone directory listing catalogues ..), and companies who tried but failed to weather the storm of change (Eastman-Kodak, Xerox, Nokia ..) is growing every month it seems.  But looking at what others have done or didn’t do, isn’t always helpful in your own business and context – you have to start with finding out what the facts and dependencies are at hand to initiate the process of finding out which direction to move in.


Digitalization is one of the key trends and buzzwords “out there” at the moment.  But isn’t this just something which has been going on since the 60’s when the first ATM’s started to appear – or something which of course is important, but still 5-10 years yet to mature and become a necessary competitive edge?  My colleague Henrik Grannas (@Hefsolutions), VP and Head of Sales at Enfo, pointed out in a blog post that 51% of corporate executives in Finland believe that digitalization will only affect their businesses in a minor way, according to a recent report by Gartner.  I’m sure percentages may vary with geography, but the general impression is probably similar regardless.


At Enfo, we believe that the combination of digital technologies and tools, creating a complete business solution, has a potential which is bigger and better than the sum of its parts.

The Devils Advocate would of course interject that it’s all slanted and pitched to drive business – but let’s look at some examples from the real world, today, which I’m sure you can relate to –


Strong AI, machine learning, autonomous decision making systems – yes, there isn’t a Terminator Skynet out there yet, luckily, but if you honestly think back just a few short years, did you have the vision, foresight and prediction that we would see machines routinely defeating human players at chess (in the distant past, at this point), defeating human players in the complex intuitive game of Go, winning Jeopardy, autonomously learning how to play computer games, recognizing dynamic internet content, combining multiple information sources with predictive analytics to act as personal assistants like Siri, Alexa or Cortana, assisting in medical analysis .. the list of science-fiction or “magic-like” application of technology is growing.  Commodity technologies like business intelligence and process automation are starting to become recognized as a necessary competitive factor – but there’s a huge potential in interconnecting these “islands of initiative” in most organizations, as they are precursors and prerequisites to reaching higher up on the technology capability ladder.  You can’t configure a learning platform to follow a decision tree which doesn’t exist, based on a partially identified process, using input metrics that aren’t measured, based on data which isn’t captured .. The famous quote "you can't manage what you can't measure" carries significant weight and relevance.


The digital dimension, a blurring between the physical world and properties which are purely digital, perhaps even augmented reality – surely that’s an exaggeration and way off?  I’d rather say it’s a matter of perspective ..  an expectation of a corresponding digital component (support, manual, online registration, purchase history, suitable accessories, delivery tracking, usage logging, app enabling features ..) – these “hidden services” are practically mainstream today, and an effective barrier of entry to businesses who want to reach a consumer market without these “features” enabled for their product or service.  Google glass may need a couple of iterations to reappear as an everyday tool, but the previously futuristic notion of Virtual Reality (Oculus Rift, Samsung Gear, Playstation) and augmented reality (combination of visualized digital content relating to the context) is becoming mainstream.  This is another brilliant example from the World Economic Forum whitepaper on Digital Transformation of Industries –


Airbus has simplified and speeded up the assembly of cabin seats by equipping its employees with Vuzix M100 smart glasses. Instructions for assembling seats are relayed in real time, allowing people who are not skilled in seat assembly to learn on the job without reading a training manual. Accenture is looking to build on this proof of concept with Airbus and broaden its use in commercial aerospace and defense manufacturing.


Just imagine how a service technician would benefit from having instant in-vision guidance by the blueprint details of the part or machine being serviced in the field, the sales-rep seeing the purchase and support history of the client on the shop floor, a care-giver seeing the medication list and activity log of a patient .. all in real-time.


Too far-fetched perhaps, or maybe a little too counter-intuitive to really become mainstream and grasped by larger groups outside of specialized professions and early-adopters, technologists.  Maybe, it lies in the eye of the beholder – but before you decide, have you (or any of the kids in your vicinity) seen one of these lately?


How do you position yourself and your business to enable such tooling, improvements, organizational change and leverage the benefit?


Wouldn’t it be great if someone said “I’ve got a quick and easy answer and solution to all of those questions”? – Perhaps a little too good to be really true, as it’s a collaborative incremental process for everyone who intend to be part of the future industry landscape to explore, build and forge those solutions together, whilst those who stand on the sidelines run the risk of ending up the way of the frog.  However, what we can do is to take a few steps forward together on that path to what lies beyond – and leave our competition to simmer a while longer in the pot!